Background: Complex sounds are encoded in population responses that support discrimination, identification, and detection. Models that simulate neural responses are widely available; however, they often require access to and familiarity with computer programming environments, such as MATLAB or Python. Additionally, models often focus on single neurons – users interested in population coding must extend the models to visualize responses of tonotopic arrays of neurons. We developed a cloud-based web app to make simulation and visualization of population responses more accessible.

Results: The web app is at https://urhear.urmc.rochester.edu, with links to a User Manual, FAQs, and a contact button for the authors. Open source code is available at https://osf.io/6bsnt/, including executable versions for Win10, Mac, and Linux.

Conclusions: The current Web App supports visualizations of AN and IC model population responses for several standard psychophysical stimuli, as well as responses to user-provided audio files. Future efforts will be focus on efficient visualization of responses to longer stimuli (music, speech) and apps that estimate psychophysical thresholds based on model responses. (NIH-R01-001641) 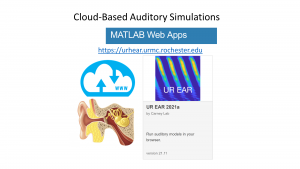