Background: The prevalence of occupational noise induced hearing loss is associated with various risk factors that affect workers employed by the South African mines. We aimed to examine the association of standard threshold shifts (STS) with exposure to noise and platinum mine dust (PDM) for miners at a platinum mine in South Africa, using demographic data and five years (2014 to 2018) of annual screening audiometry results, noise and dust exposure data (averaged exposure data).

Methods: This was an analysis of secondary retrospective data collected by the mine. Miners’ age, sex, PLH, and dust and noise exposure data were described, after which we developed a linear mixed effects regression model to predict STS. Data that had been collected from 2014 to 2018 were analysed (N=12 692); average occupational exposure levels to noise and dust were calculated from recorded measurements.

Results: Most miners were male (89.6%) and more than 50% younger than 41 years. More than 70% were exposed to > 85 dBA noise and 58% exposed to PMD from 1.5 to 2.99 mg/m3. Changes in hearing levels ranged from 8.3 dBHL at baseline (2014/2015) to 10 dBHL in 2016 (high frequency average, HFA234); with no changes thereafter. Linear mixed effects model estimated exposure associated with sex (male) was 27% and 21% for the left and right ear, respectively. The estimated effect of age, PLH, noise exposure and years of exposure was < 10% for each variable. There was no statistically significant association between PMD and STS in hearing.

Conclusion: Age, sex, years of exposure to noise, and noise exposure levels combined effects and strength of association can be used to predict STS for this group of miners. Our findings may be used to measure the mine’s HCP efficiency and prevention of ONIHL among miners. 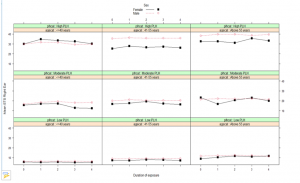